Recently, I’ve been thinking (dangerous, I know, but bear with me…) about how quick we all are to jump to conclusions, to judge somebody by their actions, even if we don’t know their backstory. For example, I see posts all the time on Facebook, talking about ‘the worst mothers in the world’ or something similar. 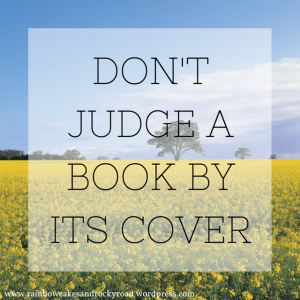 I suspect a lot of you also saw that thing about the worst birthday party invite ever, that went viral after being posted on Reddit – I think Buzzfeed was just one example of a site who picked the story up. Yeah, so some of the stuff on that invite were a bit impolite or unnecessarily picky – for those of you that don’t know what I’m talking about, it’s basically a list of things that can/cannot be received as birthday presents for some toddler or other – but maybe the parents had a genuine reason for sending that list. Yes, it’s likely they were just spoilt people, but I still don’t think they deserved the torrent of abuse the internet then sent at them. I hate the way certain stories and people, aided by news websites such as Buzzfeed and various Facebook pages, get blown up out of proportion, until half the internet is being told about how awful so-and-so is as a parent. I just don’t think it’s fair that someone – who yes, could be completely deserving of the criticism, but could also have just made a perfectly innocent mistake – is being criticised by complete and utter strangers, who’s only knowledge of the situation is what the news articles say. After all, news articles are well known for often being somewhat economical with the truth, so you could be missing some vital piece of information when you’re discussing how awful some stranger is with your friends.

On a more personal level, I’ve begun to notice that some people are quick to criticise others, without knowing the full story. I don’t want to go into too much detail, but it just really bugs me how keen people are to make sarcastic comments about others. I know it’s a cliche, but I think it’s true – don’t judge a book by its cover. Walk a mile in someone else’s shoes before judging them. You know me but you don’t know my story. All those cheesy quotes you see on social media. Yes, they’re a cliche, but remember – to become a cliche, something has to be worth overusing. As repetitive as it is, there is some truth in it. This is what I’m going to start trying to remember to ask myself – yes, this is what I think of this person, but do I have any evidence for that conclusion? Could there be an entirely valid reason for it? Would I like other people to make assumptions about me, or to get to know me and my situation?

All that said, I’m only human. I’m not going to be perfect, I am going to criticise people. This probably makes me sound awful, but I don’t think I’m the only one – sometime it’s satisfying. But I do think it’ll be good to try and focus on myself, and jump to less conclusions about other people.

Thanks for reading – that was just something I wanted to get off my chest. Hopefully it wasn’t too rambly, and I didn’t come across too irritatingly smug and perfect (because trust me, I’m not!).

What are your thoughts on all of the above?

8 thoughts on “A Discussing Teenager: Don’t Judge A Book By It’s Cover”

Where Else Can You Stalk (Sorry, Find) Me?

The view from the 'gram